Karen Greenberg on the Slow Erosion of Justice after 9/11 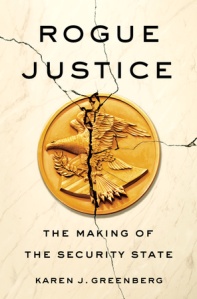 By Karen J. Greenberg, author of Rogue Justice: The Making of the Security State (Crown, May 2016)

In the spring of 2011, Attorney General Eric Holder faced the American public to announce that the five men in US custody who had been charged with the 9/11 conspiracy would not be prosecuted in federal court. Instead, they would be tried by military commissions at Guantanamo Bay. Holder explained that it was a matter of politics: Congress had taken the decision out of his hands. This book is meant to illuminate the larger forces at work during the years leading up to that disappointing decision.

Holder was only partly right.  Politics were definitely in play. But the decision was also the result of a long, slow erosion of justice that took place after 9/11, and that left the country without the will or the way to bring the accused terrorists to trial in a court system that had functioned without interruption since our nation’s founding. This book follows the twisting path that brought us to this point by uncovering transformative post-9/11 events in all three branches of government: the courts, the executive branch (particularly the Department of Justice), and Congress.

To better understand this downward spiral of law and justice, I interviewed dozens of policymakers, government lawyers, and terrorism experts, hoping to see the world through the eyes of those who embraced security over liberty as well as those who advocated for liberty over security. I focused on five areas: detention, interrogation, terrorism trials, targeted killings, and surveillance. I learned that at the very same time that law and policies were changing amid a vigorous public debate, secret laws and policies were being enacted. Both sets of laws—known and clandestine—represented a fundamental rethinking of the constitutional basis of our nation, reinforcing each other and weakening the rule of law, perhaps permanently.

As part of my investigation, I also attended many of the key hearings on torture, terrorism, surveillance, targeted killings, and detention. As I sat in one courtroom after another, I realized that these issues, and their impact on American life and values, were more vividly presented in the courtroom than anywhere else.  With that in mind, this book reports on many of those hearings and trials.

Writing this book was an enlightening experience, but also a sobering one.  Rogue Justice reveals the power of rogue actors to compromise the rule of law. It reveals that the very things the founding fathers feared—detention and killing by executive fiat, without judicial review; the use of the General Warrant; and a deferential attitude on the part of the courts towards the executive in charge—have become a disturbing new reality in post-9/11 America.

KAREN J. GREENBERG is director of the Center on National Security at Fordham University School of Law. She is also the author of The Least Worst Place: Guantanamo’s First 100 Days and coeditor of The Torture Papers: The Road to Abu Ghraib