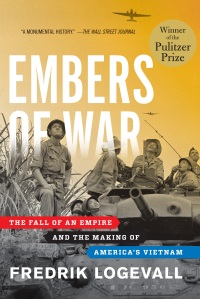 by Fredrik Logevall, author of Embers of War (Random House, August 2012), winner of the 2013 Pulitzer Prize in history.

The struggle for Vietnam occupies a central place in the history of the twentieth century. Fought over a period of three decades, the conflict drew in all the world’s powers and saw two of them—first France, then the United States—attempt to subdue the revolutionary Vietnamese forces. For France, the defeat marked the effective end of her colonial empire, while for America the war left a gaping wound in the body politic that remains open to this day.  In the below essay, Logevall distills key points from his book.

“Why are we in Vietnam?” The question resounded in dorm rooms and lecture halls and student centers on America’s college campuses in the late 1960s. It sparked heated debates at dinner tables in the nation’s homes. Norman Mailer made it the title of an iconic novel in 1967. And in a sense the question never went away, even as it was altered to the past tense after the signing of the Paris Peace Accords in 1973. It now became “Why were we in Vietnam?” and in short order it came dominate much of the writing about the war by journalists, memoirists, and historians.

And no wonder it did so, given the war’s deep and continuing resonance in American politics and culture. The intervention in Vietnam has been called the defining experience of the second half of the twentieth century for Americans, and it’s arguably the longest and bloodiest conflict in post-1945 world affairs, killing perhaps three million and more than 58,000 Americans. It also wreaked vast destruction on huge portions of Vietnam, Laos, and Cambodia.

The large and growing literature on the conflict contains a curious feature. In their rush to analyze “America’s war,” most authors have given remarkably short shrift to the French war that came before it. This is unfortunate, for close attention to that earlier history is imperative if we are to understand why the United States ended up in this faraway place, 7,000 miles from the coast of California, a place many Americans did not know existed. It is imperative if we are comprehend why the United States, borne out of an anticolonial reaction against Britain, opted to back France in a colonial war against Ho Chi Minh’s revolutionary nationalist forces, and then, once that effort ended in defeat, chose to try to succeed where the French had failed. It turns out that the Second World War and the French Indochina War that followed were absolutely crucial to all that would happen later in the Vietnam.

Nor is it merely as a prelude to America’s Vietnam debacle that the earlier period merits our attention. Straddling as it did the twentieth century’s midpoint, the French Indochina War sat at the intersection of the grand political forces that drove world affairs during the century. Thus Indochina’s experience between 1945 and 1954 is intimately bound up with the transformative effects of the Second World War and the outbreak and escalation of the Cold War and, in particular, with the emergence of the United States as the predominant power in Asian and world affairs.

And thus the struggle is also part of the story of European colonialism and its encounter with anticolonial nationalists—who drew their inspiration in part from European and American ideas and promises. In this way, the French Indochina War was simultaneously an East-West and North-South conflict, pitting European imperialism in its twilight phase against the two main competitors that gained momentum by mid century: Communist-inspired revolutionary nationalism and U.S.-backed liberal internationalism. If similar processes played out around much of the world after 1945, Vietnam deserves special study because it was one of the first places where this destructive dynamic could be seen. It was also where the dynamic remained in place, decade after bloody decade.

Embers of War considers this fascinating and important history anew, using archival materials from several countries and the full range of published sources. I worked on the book for ten years and have been honored and humbled by the discussions it has initiated and the feedback I’ve received: one reviewer named it the definitive history of the French war and the making of America’s struggle.

I invite you to read my book and to consider using it in your courses. I am confident it will get your students thinking—and talking—in new, meaningful ways about this important and transformational time in their nation’s history.