Brokers of Deceit: Examining America’s Role in the Middle-East 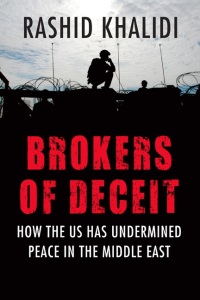 I served as an advisor to the Madrid and Washington Palestinian-Israeli negotiations from 1991-1993, and long wanted to use documents that I collected then, but I never found an opportunity to do so. Then the research of one my graduate students on American Middle East policy revealed a trove of newly declassified American and Israeli materials that cast a fascinating light on what I had experienced in the early 1990’s. Together with my observations on the Obama administration’s failures in dealing with the Palestine issue, it inspired me to write this short book. This is not a comprehensive history of US Middle East policy, or of US policy on Palestine. Instead, it focuses on three “moments:” one is the period 1978-82, another is the 1991-93 negotiations, and the third is the last two years of Obama’s first term. I saw that the specific patterns of US bias in favor of inflexible Israeli positions that we had seen in our negotiations with the Israelis were precisely mirrored in earlier administrations, and that little or nothing has changed under this president.

The book addresses some of the common distortions of language that are so prevalent where the Palestine issue is concerned in Israeli-American official and media discourse. I deal with corrupted terms like “peace process,” “Palestinian autonomy,” “Israeli security,” and “terrorism,” all of which in this parlance have a heavily loaded meaning. I thus am challenging both those who use these terms in policy-making, political discourse and the media, and the vast literature that reproduces them without critical analysis of what they actually mean. As I suggest in the book, this is truly Orwellian, and this corrupt language has a profound impact on reality.

I show that an “autonomy” scheme for the Palestinians devised by Menachem Begin to provide permanent Israeli control over the entirety of “greater Eretz Israel” in the late 1970’s has defined every essential feature of the so-called “Palestinian Authority.” In practice, this has meant ultimate Israeli control of security, land and water, unlimited settlement, and exclusive Israeli possession of Jerusalem. The book shows that this was not just Begin’s wish list. It has become the bedrock of the policy of every Israeli government since. Even worse, it constitutes the ceiling of what US policy will allow to the Palestinians. Needless to say, such a scheme cannot produce peace, but is rather designed to prolong occupation, settlement and the subjugation of the Palestinian people, which it has successfully done for the past 20 years.

In this book I unpublished documents produced by the Palestinian delegation from 1991-93 (originals are available at http://www.palestine-studies.org/ppd.aspx ), together with other documents, to show that American policy on Palestine has echoed key Israeli desiderata from 1977 until 2012. The result is that the United States never was an “honest broker.” In fact it usually served as “Israel’s lawyer,” a description by Aaron David Miller of how he and other policy-makers under several administrations actually operated.

I intended this book for a general audience, as well as academics and people in the media and government, and I encourage you to consider it for use in your courses on American politics and government, U.S. foreign policy, and the politics and international relations of the Middle East.

Rashid Khalidi is the author of seven books about the Middle East, including Palestinian Identity, Brokers of Deceit, Resurrecting Empire, The Iron Cage, and Sowing Crisis.  His writing on Middle Eastern history and politics has appeared in the New York Times, Boston Globe, Los Angeles Times, Chicago Tribune, and many journals.

More about this book