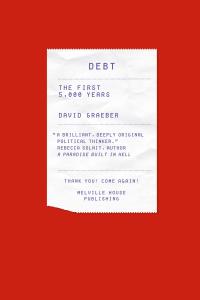 Debt is all around us. Modern economies run on consumer debt; modern nation-states, on deficit financing; international relations turn on debt.  What’s more, for the last three years, we’ve faced a global debt crisis that’s hobbled the world economy and still threatens to send it crashing into ruins.  Yet no one ever stops to ask: how did this happen? What is debt, anyway? What does it even mean to say we “owe” someone something? How did it happen that, in almost all times and places in human history, “paying your debts” has been a synonym for morality, but money-lenders have been seen as the embodiment of evil? I first began asking myself these questions as an activist, during the “drop the debt” campaigns in the early 2000s. But it was only after the financial meltdown of September 2008

that answering them became a driving passion. It seemed to me that in the days immediately after the crash, the space had opened up for a genuine conversation about money, markets, credit, and finance, about the nature of debt, about value, the relation of money and morality, about what people genuinely owe to one another. Yet somehow, this conversation never happened.

It was as if we’ve forgotten how to ask big questions any more.

It was at this point I realized that with my training in history and anthropology, I was in a unique position to try to open the conversation up. Thus began a series of investigations that culminated in the writing of this book. What I discovered along the way startled even me. First of all, almost all our familiar assumptions about money history turned out to be wrong. We are used to assuming that economic life began with barter, moved on to money, and only then did we develop credit systems. In fact, what happened was precisely the opposite. Credit came first. What we’d now call “virtual money” preceded coinage by thousands of years, and human history has alternated back and forth between periods of virtual money, and periods dominated by gold and silver—which have also, invariably, been times of empire, war, and slavery. What’s more, since the dawn of recorded history, arguments over credit, debt, virtual and physical money have been at the very center of political life—the language of the Bible and other great religious texts resonates with it, untold popular uprisings have been inspired by it, and the outcome of these battles have shaped our own laws, our economic institutions, our very conceptions of freedom and morality, in ways we can no longer even see.

Reconstructing this history of debt reveals odd concepts—life debts, blood debts, flesh debts, milk debts—but also, throws all our familiar conceptions of history askew, from the real nature of the African slave trade, to the origins of Adam Smith’s free market rhetoric in Medieval Islam. Above all, it reveals we stand, today, at a precipice. There is every reason that the return to virtual money marks a major turning point in world history. But it’s only by looking at the full sweep of the past that we have any chance of understanding what that might really mean.

DAVID GRAEBER teaches anthropology at Goldsmiths, University of London. He is the author of Towards an Anthropological Theory of Value, Lost People: Magic and the Legacy of Slavery in Madagascar, Fragments of an Anarchist Anthropology, Possibilities: Essays on Hierarchy, Rebellion, and Desire, and Direct Action: An Ethnography. He has written for Harper’s, The Nation, Mute, and The New Left Review. In 2006, he delivered the Malinowski Memorial Lecture at the London School of Economics, an annual talk that honors “outstanding anthropologists who have fundamentally shaped the study of culture.”