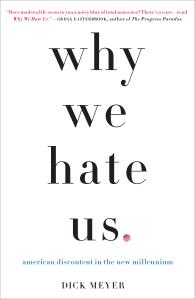 WHY WE HATE US by Dick Meyer

by Dick Meyer, author of Why We Hate Us: American Discontent and the New Millennium  (Three Rivers Press, 2009).

Since publishing Why We Hate Us: American Discontent and the New Millennium, the single question I have been asked the most is, “Will Barack Obama lead Americans to hate us less?”

The basic argument of my book is that Americans have developed a broad, enduring distaste and suspicion toward the main institutions and directions of our public culture. This holds true for politics, government, journalism, business, entertainment, marketing, law and even the clergy. Increasingly, Americans feel alienated from their culture and susceptible to its coarseness and toxicity.

So understandably there was great hope attached to the election of Barack Obama, hope that extended beyond politics. That hope, however, was no match for the decline of pubic trust in American institutions that has marched on relentlessly since the time of Watergate. And President Obama is no match for the effects of the worst economy since the Depression.

The president has been able to maintain his personal popularity. And he has lifted Americans confidence in government as a whole marginally. But there is no broader halo effect. There is no evidence that Americans are becoming more impressed and partial to the rest of the culture.

Indeed, our disenchantment has grown.  One strand of that, a positive development in my view but a cynical development to others, is what I call the “Madoff Effect.” Bernie Madoff is now the greatest crook in the history of American money. The coincidence of his capture and the collapse of the financial system in this country has guided many Americans to see our economic plight in essentially moral terms. The human vice of “greed” is seen as a deeply ingrained character flaw in the people who run our financial system – greater than the greed of past generations.

I agree with this assessment, but I might put it in rather fancier terms. Moral thinking and ethical practice in America since the 1960s has been marked by the growth of relativism and narcissism. The notions that there can be moral clarity, that some things are right and others wrong, that clear codes of conduct can and should apply to professional conduct, have become quaint, square and naïve. These ideas are all obstacles to doing what you wish to do and that, in a “culture of narcissism,” is simply intolerable.

The Baby Boom generation that grew up in this climate now runs the economy that has just collapsed. They have levels of education and training beyond any prior generation. They created a financial elite more “elite” than any prior generation. The gap between the mega-rich (say the top .01 percent of earners) and the mere super-wealthy was never greater than it was in the early years of the 21st century. An extraordinary percentage of that wealth was not garnered by risk taking entrepreneurs and business owners, but by employees of large institutions.

By 2009, it was clear that the financial system that motored this boom was not just unstable, but unethical. In other words, mini-Madoffs – credentialed with M.BAs and clad in Saville Row — had seized control of the nation’s largest financial institutions and compared to prior generations were considerably less constrained by their fiduciary responsibilities, professional ethics codes, social conscientiousness and a traditional American/ Puritan ethic.

Vietnam and Watergate destroyed public trust in political institutions in ways that lasted three decades and counting. The crash of ’08 will likely do the same for economic institutions, which weren’t exactly beloved going in.

Have there been any counters to this trend?

Journalism is in full crisis. The number of professional journalists shrinks by the week. The quality and depth of news coverage is in retreat is evidenced by the embarrassingly excessive coverage of Michael Jackson’s death.

Traditional religions are losing membership, though alternative practices, especially evangelical Christianity, are growing. Americans continue to be nomadic in where they live, furthering the decline of neighborhoods and geographic communities. People spend ever more time in front of electronic screens, bonding with e-commerce sites, social media friends and video games instead of eye-to-eye contact with fellow Homo sapiens.

Hollywood continues to stick to its recipe of constantly chasing profits by increasingly the vulgarity and violence of what it produces. The marketing arts have become ubiquitous and there are have quadrants of our lives anymore that have not been declared commodities susceptible to marketing.

So, do we hate us less than we did? Not yet.

Dick Meyer is currently the editorial director of digital media at National Public Radio.  Meyer was also a reporter, producer, online editor, and columnist at CBS News in Washington for more than twenty-three years.

One response to “Obama, Madoff and American Self-Esteem”