Your Brain on Swine Flu 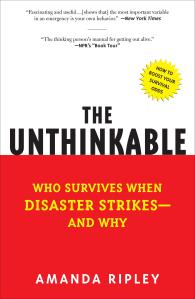 The Unthinkable by Amanda Ripley

by Amanda Ripley, author of The Unthinkable: Who Survives When Disaster Strikes—and Why and a contributor to TIME Magazine.

One of the strange things about influenza pandemics is that they happen in slow motion, giving us time to reflect.
Looking back, it’s clear that one major challenge was (and will be) striking the elusive balance between reasonable mobilization and overreaction. We want people to wash their hands and stay home when they are sick; we don’t want people to stone buses carrying a sick passenger from another country.

How do we dial up—or down—our response to a pandemic in real time? It might help to shape public warnings and communication according to how the brain actually works.

We know that the brain does not conduct purely rational assessments of risk (i.e. probability multiplied by consequences). We know, thanks to the work of psychologists Daniel Kahneman and Amos Tversky, that people rely on emotional shortcuts, called “heuristics,” to make choices. The more uncertainty, the more shortcuts. And the shortcuts, while useful, lead to a slew of predictable errors.

In fact, the chances of a flood occurring for some other reason is far greater. But that kind of workaday flood does not trigger the same cascading series of emotional shortcuts. It is less scary for a reason, which isn’t to say that it’s rational.

But how does the brain assess the risk of a pandemic influenza? We know that in general people assign more risk to things that they dread. Dread matters more than almost anything else.

So to manipulate dread (to boost or lower dread when needed), we need to understand what causes it. After talking with many risk experts, I have started to imagine dread as a sum of many other, powerful factors. With apologies for oversimplifying a complex topic, I think it is helpful to think of dread as an equation that looks something like this:

So if public-health officials need people to take hand-washing warnings more seriously after a few months of warning fatigue, it will help to amp up the “imaginability” of the threat. The best way to do this, according to decades of risk research and centuries of journalism, is to tell a very specific, vivid story. The brain will pay much more attention to a story about a young, healthy pregnant woman who died of the new influenza virus than to a statistic about the potential lethality of the pandemic.

Alternatively, if some people are overreacting to the threat, we should be able to ramp down the dread factor. We can lower the sense of uncontrollability by repeatedly reminding people that they actually have the ability to keep themselves safe—by washing their hands often, covering their coughs and staying home when sick. It also helps lower the scale-of-suffering component if we repeatedly put the situation into perspective, reminding people (as CDC officials did to good effect last spring) that very few people have died from this flu—compared to the approximately 36,000 people who die of regular flu-related causes in the U.S. each year.

If this sounds coldly manipulative, that’s because it is. But if ever there was a place for manipulation, it is in preventing mass-casualty catastrophes. We should use all the tools of movie-makers, marketers and casinos to save ourselves, provided we stay within the safe havens of honesty, accountability and transparency.

Pandemics are unpredictable, maddeningly so. But we know a lot about human behavior in the face of unpredictable threats. We know that the public responds very well to repeated, clear, consistent and honest warnings—that come from through many different channels, from the news media to the mayor to the President. We know that even if we can’t predict the course of H1N1, we can predict what factors will create and destroy dread, and that may matter just as much.

One response to “Your Brain on Swine Flu”